Pogo pins can be divided into the following types according to the structure or installation method:

1. Flat-bottomed pogo pin, the bottom of this type of pogo pin needle tube is flat and the outer diameter of the bottom is larger than the outer diameter of the needle tube, which is convenient for vertical patching to the PCB board. This type of pogo pin is from the perspective of installation. It is also called vertical pogo pin, which is generally used for board-to-board connection, or protruding for external connection, and can be used for waterproof design.

2. Pogo pin with tail pin, also called plug-in pogo pin or plug-in pogo pin; this type of flat-bottom pogo pin has the same thing, it is installed vertically on the PCB board, the difference is the needle tube of the plug-in pogo pin There will be a tail pin protruding from the tail for soldering on the plug-in board. Of course, the pogo pin with tail pins also has tail pins that are bent, so that its installation method will be different, and it can be installed at a certain angle with the PCB board or used for other structural installations.

5. There are other special-shaped pogo pins. Since the pogo pin itself is a special customized product based on the actual application, it will not be introduced here. In the next article, we will introduce the type of pogo pin with special structure.

Welcome to our blog, if you have any questions or suggestions, please leave a message.

What is a pogo pin and what are pogo pins used for? 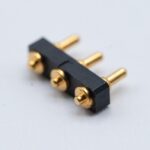